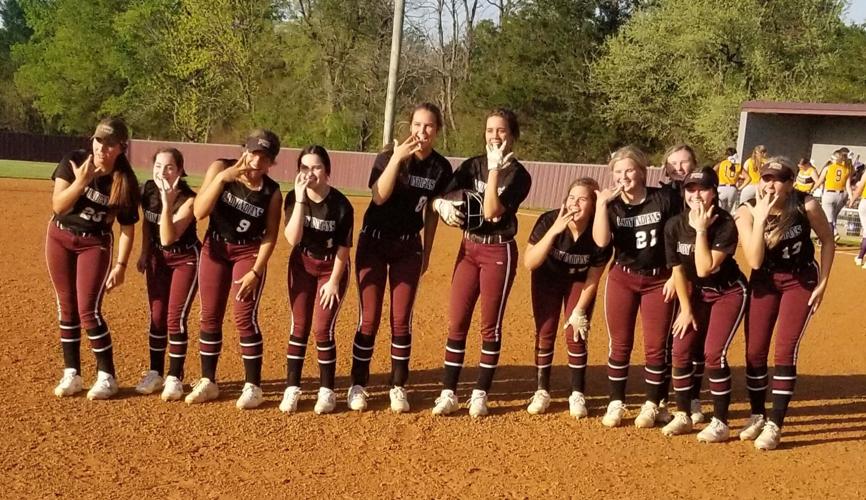 Pocola softball players lick their fingers to signal that they are hungry for more wins after eating up a district championship at home and extending their winning streak to 10 games. 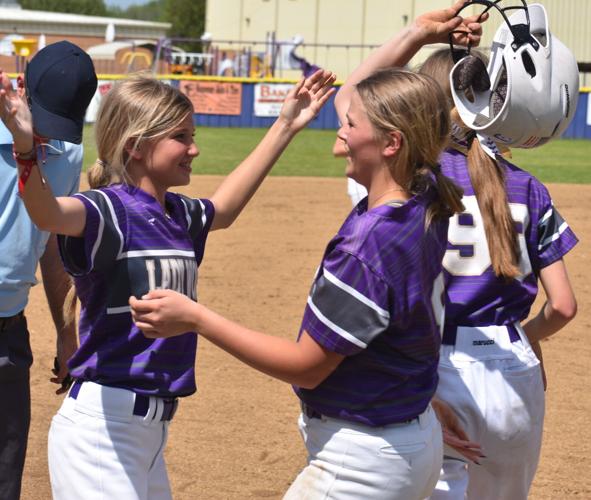 Pocola softball players lick their fingers to signal that they are hungry for more wins after eating up a district championship at home and extending their winning streak to 10 games.

Four area softball teams -- Heavener, Pocola, Whitesboro and Buffalo Valley -- won slow-pitch softball district titles on Friday. Here's a quick rundown of how they pulled them off to finish a week in which nine area teams won districts, including Howe, Wister, LeFlore, Red Oak and McCurtain.
Heavener wins Class 4A district title
Heavener (17-12, ranked 10th) won its first game 9-1 against Vian, scoring a run in the first inning, two in the second, four in the third and two in the fifth.
Cayleigh McGee hit a grand slam in the third inning. Ava Cartwright was 3-for-3 with a walk and three RBIs. Paisley Stacy was 2-for-2 with an RBI. Morgan Smith, Gracie Morrison and Anleigh Hackney each had a hit and a walk.
Heavener won its second game 12-0, scoring three runs in each of the first two innings and six in the third. Cayleigh McGee was 3-for-3 with a home run and two RBIs. Cartwright was 3-for-3 with an RBI. Garcia was 3-for-3 with four RBIs. Hackney walked twice. McKinley Alexander had a hit and two RBIs, driving in the game-ending run on a sacrifice fly.
Pocola sweeps Sallisaw Central for Class 3A district title
Pocola (22-3, ranked second) beat Sallisaw Central 12-0 and 8-0 to win its Class 3A district title on its home field. Kail Chitwood was 3-for-3 with two home runs and three RBIs in the first game. Madison Linker and Lety Parga both had a hit and two RBIs. Chitwood hit a two-run home run and walked in the second game. Linker was 2-for-3.
Whitesboro wins Class A district title
Whitesboro (26-8, ranked third) won its Class A district title, beating Paden 9-0 and Indianola 12-0 and 13-0.
Kinley Barron hit a two-run double against Paden. Madison Grogan hit two home runs and had seven RBIs in the first game against Indianola. In the finale, Barron hit a game-ending grand slam.
Buffalo Valley wins Class A district title
Buffalo Valley (27-14) beat Bowlegs 26-0 and New Lima 11-0, 12-0 to win its Class A district title. Cady Myers and Kelsey Cauthron both hit two home runs and Abi Wilson hit one against Bowlegs.
Kaylyn Griggs hit a home run in the first game against New Lima. Cauthron and Courtney Grey hit home runs in the finale against New Lima.